Consumer Confidence rose 1.7 points to 128.7 in April, surprising the consensus which anticipated a decline. The index improved in April for both the present situation and future expectations. Wells Fargo

The Bureau of Economic Analysis (BEA) released its “advance” estimate of first quarter 2018 GDP and reports real gross domestic product (GDP) increased at an annual rate of 2.3 percent. The Bureau emphasized that the Q1 estimate is based on source data that are incomplete or subject to further revision. The “second” estimate for the first quarter, based on more complete data, will be released on May 30, 2018.

The US Census Bureau released its monthly Advance Report on Manufacturers’ Shipments, Inventories and Orders for March 2018:

Led by slower growth in production and employment related indicators, the Chicago Fed National Activity Index (CFNAI) declined to +0.10 in March. The index’s three month moving average, CFNAI-MA3 decreased to +0.27 in March from +0.31 in February.

The Federal Reserve Bank of Richmond released its Fifth District Survey of Manufacturing activity and reports suggest that manufacturing activity in the district slowed in April, its first negative reading since September 2016. The index was weighed down by a contraction in shipments and new orders. Surveyed firms were generally optimistic that they would see overall growth in the next six months.

On Thursday afternoon the 26th, I was interviewed by Liz Claman on Fox Business News to draw a distinction between increased demand for steel vs. the Sec. 232 steel tariffs as the cause for the increasing steel prices in the marketplace. Click on the image or view the clip here. 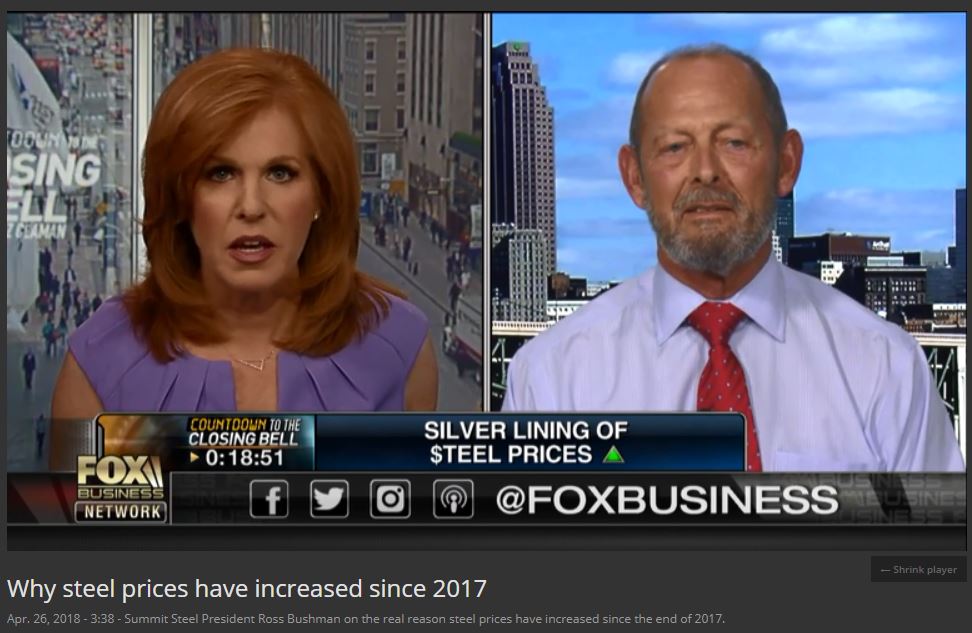 This confuses me; over the past couple years the lefties have forced communities to remove statues and memorials to those involved in the Civil War, attempting to hide our history as a nation with charges of racism. Total bullshit in my view.

In today’s local newspaper, the Plain Dealer, here in Cleveland, there is an article out of Montgomery, Alabama, where the nation’s first memorial to the victims of lynching was just opened to the public on Thursday. What? Is this not blatant racism against white people? Who wants to see such a statue? A man on a horse must come down or be moved to a closet somewhere but this is fine?

I do not condone those actions, they were evil, my point is, it is a part of our history as a nation, correct? Again, the left is trying to change everything we are as a people, to fit their twisted narrative. I do not like it.

Infrastructure X (Keystone & Dakota pipelines) Regulation Reform XX 1 in 2 out
Individual Tax Reform XX Entitlement Reform
Business Tax Reform XX Education Reform X
Healthcare Reform Veterans Administration Reform X
Rebuild our Military X Trade Reform X
Secure our Borders (The Wall) XX Lead the world from the front XX
Help for the poor XX Drain the swamp X as we speak
Peace through unmatchable strength Support Israel X
Destroy ISIS XX Extreme Vetting XX
Conservative Supreme Court nominees XX American Jobs XX
I will track these campaign promises and will check them off as each is accomplished adding those I have missed as they become apparent. This is quite an agenda and will be difficult to achieve all in one term but I believe the American people are behind him and know these things need to be done. Now, if he can get our legislators to support him instead of fighting him….